Facebook is getting rid of a privacy feature that let users limit who can find them on the social network.

. said Thursday that it is removing a setting that controls whether users could be found when people type their name into the website's search bar.

Facebook says only a single-digit percentage of the nearly 1.2 billion people on its network were using the setting.

Gilbert Arenas a.k.a. Agent 0 has been known to rock some of the illest kicks on the hardwood. Last week he was seen hooping it up at the Drew League in the grail status Lebron X Celebration Pack. Can you believe that??? Even more recently he…

Usually the off-season is difficult enough albeit soothed by the dulcet sounds of the ballpark in summer, but with the NBA lock-out underway with no end in sight, this off-season stretches out before me like a lazy brown cat settling down for an afternoon nap. To feed my basketball jones, I’ve taken to doing some branding mock-ups for teams that desperately need it, starting with the New Jersey Nets.

The New Jersey Nets are an interesting…

USA IS THE #1 CABLE NETWORK FOR THE 8TH CONSECUTIVE SUMMER DJ Green Lantern has worked with an innumerable amount of hip hop acts over his career and one can safely a##ume he has a hard drive of music rap nerds would Break Bad over. In a recent intervi…

DJ Green Lantern has worked with an innumerable amount of hip hop acts over his career and one can safely a##ume he has a hard drive of music rap nerds would Break Bad over. In a recent interview with NahRight for their Mixtape Memories series, The Evil Genius reveals that a mixtape with Jay Z entitled Presidential Invasion was intended to come out weeks before Kingdom Come.

The idea for the mixtape surprised everyone…

Vado will release the fourth installment of his Slime Flu mixtape series on August 15 via DJ Khaled’s We The Best and has tapped Kirko Bagz, Raekwon, Fabolous, Pusha T, and N.O.R.E for the 11-track offering. Hit the jump to check out the project’s complete tracklist.…

If you’re a student of the various eras of the New York City mixtape culture, you are no doubt familiar with DJ Green Lantern’s repertoire. During a period when mixtape DJs were being judged solely on how many exclusives they could cram onto their latest tape, Green carried the torch for the true mix masters by implementing time tested techniques such as blends and custom remixes of hot…

"We all joked about doing an ATL 2, and how down T.I.'s character would be running the comic section of the newspaper and…

NEW YORK (AP) — A rookie police officer shot and k#lled a 14-year-old boy on a street early Sunday after he refused to drop his gun and pointed it at them, authorities said.

Shaaliver Douse died of a single gunshot to his jaw after the confrontation in the Melrose section of the Bronx.

Two officers with the New York Police Department were on foot patrol when they heard gunfire at around 3 a.m. The officers responded to the scene and found the boy with a…

Former No. 1 pick Greg Oden will give it one more try in the NBA. Oden chose the Miami Heat Friday

Former No. 1 pick Greg Oden will give it one more try in the NBA. Oden chose the Miami Heat Friday, one of six teams that had been on his list of finalists to try and make his return from injuries that have limited him to exactly one full season’s worth of games, 82, in six seasons. Oden had been working out for several teams for the last couple of weeks trying to convince teams that he could potentially return to…

During a longwinded, occasionally entertaining rant about how studios can't seem to formulate new intellectual properties, Deadline's Mike Fleming, Jr. let some biggish news slip: Denzel Washington, who can be seen in this weekend's oddly satisfying shoot 'em up "2 Guns," turned down a "small role" in the next 'Fast and Furious' movie (currently titled "Fast & Furious 7"), to be directed by…
Continue

Kelly Rowland Professes Her Love for Pusha T on Instagram 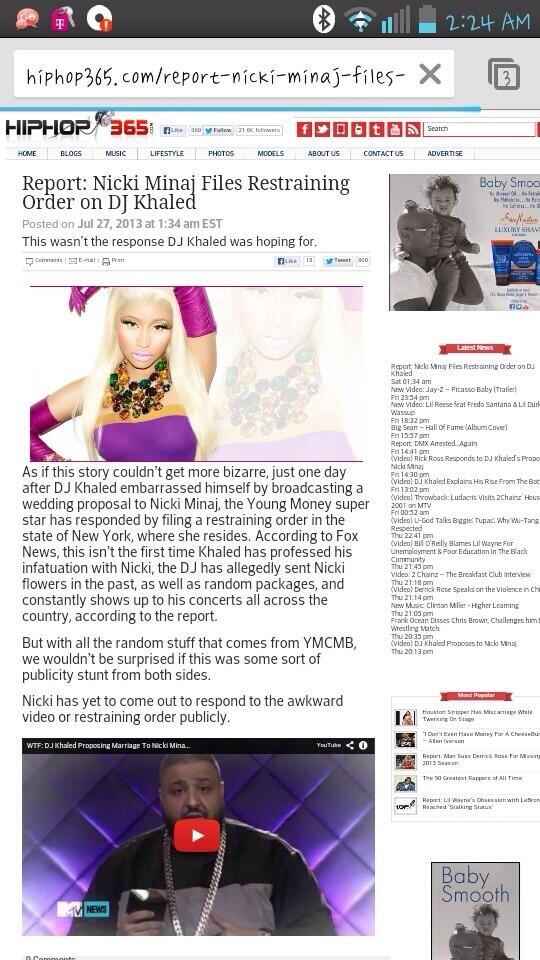 This wasn't the response DJ Khaled was hoping for. As if this story couldn't get more bizarre, just one day after DJ Khaled embarra##ed himself by broadcasting a wedding proposal to Nicki Minaj, the Young Money super star has…

A source tells the Sporting News that the Celtics would like to swing a sign-and-trade for impending free agent Josh Smith.
The only way the Celtics could pull this off is if they get a trade exception after unloading Paul Pierce's $15.3 million contract. They'd then start a rebuild process around Rajon Rondo, Smith and Jeff Green. It's not exactly a championship-caliber "Big 3." We doubt GM Danny Ainge would actually pull the trigger on this when push…

This is Big Money Talk, Can You Answer Me?

News of Jay-Z’s new LP, Magna Carta Holy Grail, hit the wire last night and with the announcement came the revelation from the Wall Street Journal that…

Rapper Pusha T has been working non-stop, whether making new music in the studio or making new pieces for Play Cloths, the hustle doesn’t stop for him. He recently held the grand opening for his second fashion boutique named Creme. The boutique is located in Virginia. that comes to no surprise since…

Joe Budden: "This is the Slaughterhouse I was waiting on"

I'm ready for whatever he's referring to…