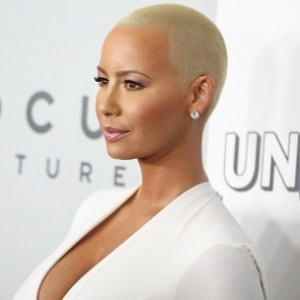 Amber Rose says she would never mention Kanye West’s children in an argument.

According to TMZ, model Amber Roserecently appeared on the “Allegedly” podcast to share her thoughts on her ex, Kanye West’s rant on Twitter yesterday (January 27).

Several times during his rant, which has since been deleted, Kanye mentioned Amber’s son with Wiz Khalifa. According to Rose, who says she wasn’t surprised by the rapper’s actions, children should always be off limits.

She went on to explain that she has never, and will never mention Kanye’s kids in any argument.

“The thing of it is, I would never talk about kids in an argument,” Amber Rose said. “It just shows the type of person he is. Even him saying stuff about my son, I still didn’t say anything about his kids. I’m not going to. That’s ridiculous. They’re innocent babies. You don’t ever, ever talk about a baby. Ever. So, that just shows how fuckin’ ridiculous he is.

“I know he’s a fuckin’ clown,” she added. “I know him. The crazy thing is he came out with a song, I think last week saying that I had my son for a meal ticket. And I didn’t even say anything. I was just like ‘Man, he’s a cornball. I’m not saying shit.’ Then he gets on the internet today and he’s like ‘Stripper trapped you with this.’ But you took me around the world. We dated for like two years. You’re talking shit about Wiz and my baby. He still talks about me in songs. He still talks about me all day.”

Rose was later asked about a tweet she made about her past sexual relations with Kanye. She didn’t confirm if her tweet was true or not, and instead stressed that her son be left out of any arguments.

“Listen, don’t talk about my kid,” Rose said. “That’s all I gotta say. Just don’t talk about my baby. I wouldn’t have said anything if it was just between him and Wiz. Just two grown men hashing it out. That’s their business. I would have kept it cute and just minded my business, but you don’t bring in my baby. That’s so corny. And that’s the second time you did it this week.”

An audio clip of Amber Rose speaking on Kanye West, can be found below.