Hotheaded hip-hop stars Drake and Chris Brown turned a SoHo nightclub
into a blood-soaked battlefield yesterday as they — and their entourages
— fought with fists and bottles over the affections of Rihanna, sources
and witnesses said.

“I am f--king the love of your life,”
read a note sent from Drake’s table to Brown at about 4 a.m. after Brown
ordered his rival’s table a bottle of pricey Armand de Brignac
Champagne — commonly known as Ace of Spades, a witness said.

Rihanna — Brown’s singer ex-girlfriend who had also been linked to Drake — was not at the W.i.P. club, where Brown was buying bottles for several tables in the VIP section.

“I
saw him tell the waitress to send a bottle to Drake’s table. I then saw
a waitress come back with a piece of paper and gave it to Chris,”
Ingrid Gutierrez, 21, a model who was sitting at Brown’s table, told The
Post. “He looked upset and just threw it on the floor.”
Drake
and a posse that included rapper Meek Mill and all their bodyguards
then walked over to the table where a shirtless Brown was seated.


“They were giving him [Brown] the middle finger. They got into each other’s faces and were shouting at each other,” Gutierrez said.

“Chris told Drake to f--k off, and the next thing I could hear is the sound smashed glass and mayhem started.


“Somebody in Drake’s group — I don’t think it was Drake — swung at Chris, but missed.
“Chris didn’t swing back, he just tried to brush them off. He told us, ‘Let’s go,’ but there were bottles flying at us. I saw one bottle was thrown, it looked like a vodka bottle, and hit Chris on the face,” she said.


“The anger from Drake’s entourage was terrifying.”

The bloodshed touched off a full-scale brawl in the basement club —
where at least five bystanders were injured by flying bottles .

W.i.P., connected to the much-larger Greenhouse club, was jammed at the
time with a slew of celebrities — including Mary J. Blige, Trey Songz,
Wale, Ne-Yo and NBA star Tony Parker — and their hangers-on.

Brown, 23 — on probation for[..]aulting Rihanna three years ago — suffered a deep gash on his face.

“There was blood gushing out of Chris’ chin,” Gutierrez said.

Brown later tweeted a photo of his wound with the taunt, “How u party
with rich n---- that hate? Lol....Throwing bottles like girls?
#shameonya!”

Gutierrez was also injured in the fight.
“I was on the couch,
covering my face, because I’d been hit on the head by a bottle and my
head was bleeding,” the Brooklyn woman said.“I thought I was going to
die.”


W.i.P.’s floor was left a wasteland of broken glass, spilled booze and
blood after the capacity crowd emptied out onto Van Dam and Varick
streets.
Once outside, Brown took off his shirt again and stood
at a waiting SUV as a member of his entourage cursed and pointed to
someone in the crowd, an amateur video posted on YouTube shows.

NYPD
detectives yesterday took copies of surveillance video that captured the
brawl. There were at least two police reports filed as cops
investigated.

Rihanna has been in New York for the past several days. Last night she
was spotted at Jay-Z’s 40/40 Club. Drake, 25, who has hooked up with the
24-year-old songstress, was in upstate Saratoga Springs for a concert
last night.


He didn’t directly address the fight, but he told the crowd: “I woke up
this morning and the only thing that was on my mind was the fact that we
had a [expletive] show in Saratoga tonight.”
Sources said he
walked into the W.i.P club with his crew at about 2:45 a.m. when Brown
was already partying hard with another gal pal, model Karreuche Tran.

“Everybody was having a good time dancing,” recalled Gutierrez, a Fordham University student.
“I
was drunk, Chris was drunk, we were all drunk. We were about to leave
the club and go to an after-party at Chris’ hotel room,” she said.

Brown’s rep, Raymond, said, “Chris, Karreuche and his friends were
victims of a brutal attack last night at W.i.P. They sustained several
injuries. Chris and his party are cooperating with New York authorities,
who are pursuing the incident further.”

The Canadian-born
Drake — whose real name is Aubrey Drake Graham — has declined to speak
with police but plans to talk to them in the company of his attorney at a
later date, said NYPD spokesman Paul Browne.

Drake’s spokeswoman, Kelly Bush, insisted, “Drake did not participate in any wrongdoing of any kind last night at W.i.P. He was on his way out of the club when the altercation began.

Gutierrez plans to sue the club and the bottle thrower, who has yet to be identified.

“The club W.i.P. failed in its duty to protect its patrons and my
client, Miss Gutierrez,” said her lawyer, Sal Strazzullo. “We will study
the tapes of the incident to identify the person that threw the bottle
that hit her.” 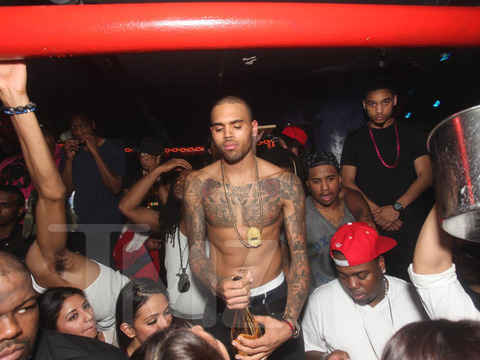 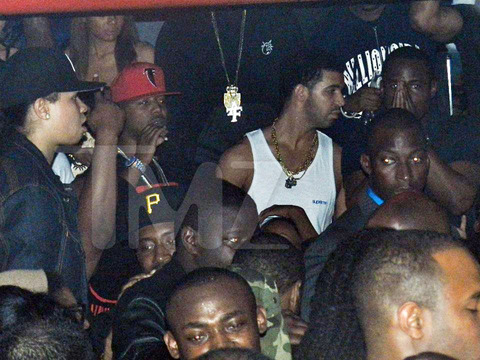 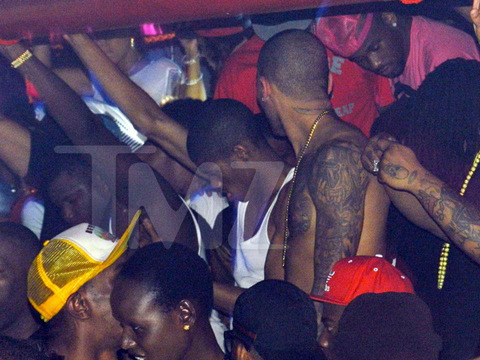 Pretty much CB tried to brush off Drizzy because he had models on his
side and was trying to take them back to the telly but Drake was on one
and wanted to fight CB or at least start !!?? Drake passport about to be
revoked lol damn this !! getting crazy