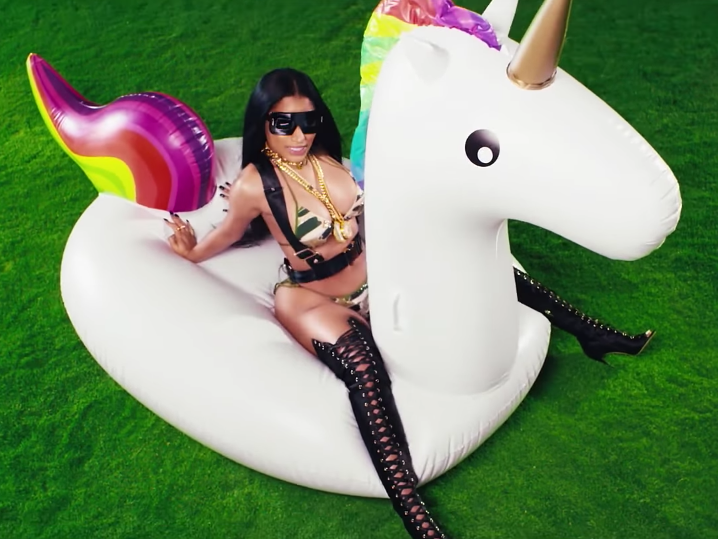 New York, NY – Back in 2012, Lil Wayne made the call to pull Nicki Minaj from Hot 97’s Summer Jam stage after Peter Rosenberg slammed her single “Starships” a few hours before she was to hit the stage. The inept move led to Nicki and Flex having an on-air conversation that went nowhere and since then he’s continuously clowned her. Even now five years later, he’s calling her featured lyrics on Gucci Mane’s Hot 100 hit “Make Love,” “dumpster juice.”

He made the comment on his Instagram with a clip from the visual released on Tuesday (March 29), of her sitting on an inflatable pool unicorn, which he comically misidentifies as a bunny.

“Yoooooo??? Rhyming on a plastic air bunny????” he writes. “Wow! This verse is Dumpster juice marinated in dinosaur piss!!! America this is your queen of rap! Ps. Just calling it as I see it! Just an opinion! @nickiminaj don’t be tight! Just my opinion!”

Flex has previously called out Nicki, claiming she uses a ghostwriter and delivers what he considers subpar raps.

The song, laced with the bar that ignited a battle over the Queen of Rap crown with Remy Ma, has inserted Minaj into Billboard history for the most Hot 100 hits for any fema... with a whopping 76 entries.

The short-lived lyrical war with Remy Ma resulted in Nicki’s #3PackFromParis response records, “No Frauds,” “Regret in Your Tears” and “Changed It,” which helped solidify her mark in Billboard’s chart history. She also saw an uptick in sales for The Pinkprint and signed a modeling contract with Wilhelmina Models.