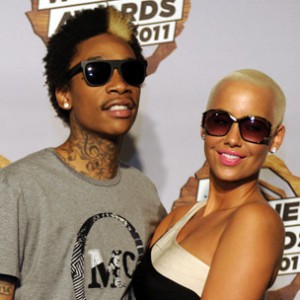 This week in Hip Hop, after Wiz Khalifafailed to take kindly to the retitling of Kanye West’s forthcoming album, the two personalities engaged in a heated back and forth over Twitter. Later, Wiz’s estranged wife and Kanye’s ex-girlfriend, Amber Rose, blasted Mr. West, seemingly embroiling herself in the widely publicized Twitter rift. Elsewhere this week, Machine Gun Kelly took aim at Macklemore for continually addressing race in Hip Hop and the on-going cultural appropriation debate.

After announcing the title change via Twitter, Wiz Khalifa took to the social networking platform to share his thoughts.

“Please don’t take the wave,” the Pittsburgh, Pennsylvania rapper wrote in a series of posts. “Max B is the wavy one. He created the wave. There is no wave without him.”

Wiz went on to explain Max B’s influence on his own career.

“He’s the reason I sing on all my songs,” Wiz Khalifa later tweeted. “That’s the wave. If theres nothing wit that sound ITS NOT WAVY.”

When announcing the title change, Kanye West acknowledged the influence industry executive Andre Harrell and Max B had had on the project.

“All respect to Andre Harrel and Max B #Waves,” Kanye tweeted.

“Oh niggas must think I’m not petty cause I’m the best that’s ever made music,” West wrote in a series of posts. “Like, oh that’s Ye and I can put his wife’s initials on my twitter@Wizkhalifa.”

Amber Rose Blasts Kanye West For Getting His “Booty Fingered”

A short while after the heated back and forth between Kanye West and Wiz Khalifa, Wiz’s estranged wife and Kanye’s ex-girlfriend, Amber Rose, took to Twitter to weigh in on the widely publicized rift.

During his Twitter outburst, Kanye made mention that he “owned” the couple’s toddler son, Sebastian.

“Awww @kanyewest are u mad I’m not around to play in ur asshole anymore? #FingersInTheBootyAssBitch,” Rose said in response.

During a brief interview with TMZ earlier this week, Machine Gun Kelly decried Macklemore for continually addressing the topic of race in Hip Hop.

After the TMZ cameraman told MGK that, in his opinion, he is one of the Top Five greatest White rappers of all time, the Bad Boy Records rapper replied: “I’m not just a great White rapper. I’m a great rapper.”

“Race is not an issue,” Machine Gun Kelly later said. “Race is an issue for people like Macklemore... I’m comfortable in my own skin, man. I can’t help other people be the same way.”