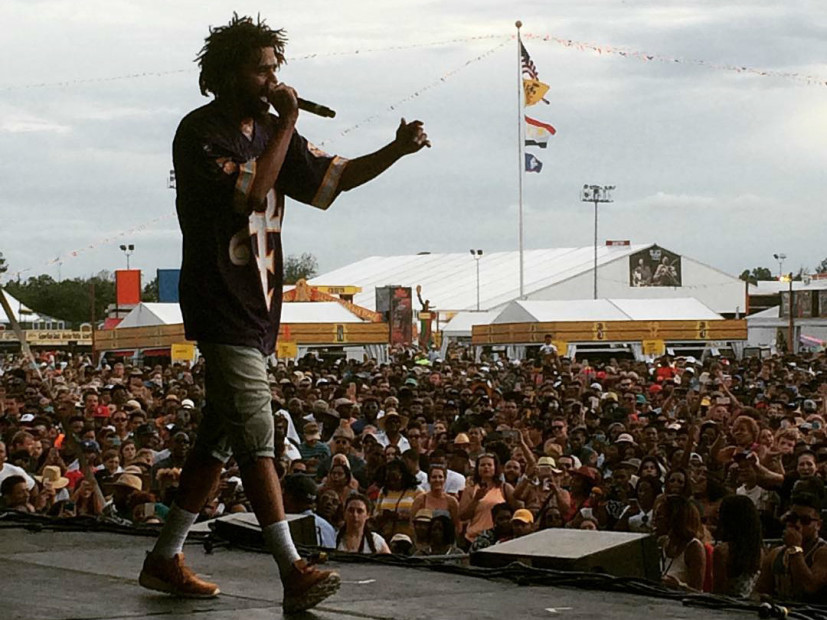 NEW ORLEANS, LA - The music world was shaken when the news broke that Prince died in his home Thursday (April 21). Many took to social media to pay tribute or some, including The Game, released music to honor the legend.

J. Cole paid tribute to the Purple Rain singer by wearing a custom Minnesota Vikings jersey at a recent performance at the New Orleans Jazz and Heritage Festival. The North Carolina rapper was given the jersey by producer Chase N. Cashe. The jersey was made by Ain't Shit Funny and features Prince's logo in place of a number on the front and back and the singer's name on the back nameplate.

The 2014 Forest Hills Drive rapper signed the jersey for Chase after he wore it.

"2 Chase, Much love 2 My brother. This shit was clutch! Legendary! J. Cole"

Complex spoke with Ain't Shit Funny founder and designer Joshton Peas about the jersey, which is sold out after sales increased in the wake of the singer's death. He says the shirt is to be back in stock next week. Peas gave Chase N. Cashe the jersey.

"Chase N. Cashe has always been a good friend through my work in the music industry," he says. "He's always supported my brand and vision. Cole didn't have a tribute ready for Prince before the Jazz Fest, so Chase let him rock the jersey off his back to pay homage."

Prince was a Vikings fan and attended games when he could. He wrote the tribute song "Purple and Gold" in 2010 when the team won their last playoff game to date, a 34-3 win over the Dallas Cowboys in the NFC divisional round. He was active in the entire Minnesota sports scene and showed support to all the teams.