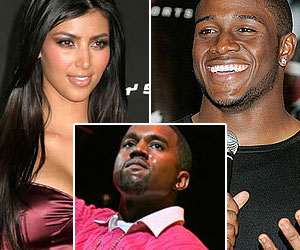 So, earlier this week, it was confirmed that Kim Kardashian and Reggie Bush officially broke up. While, it was reported that their relationship ended because of long periods apart, rumors are surfacing that Kanye West may have contributed.
According to FoxNews.com, Bush saw text messages from the rapper/producer on Kim's phone and wasn't too happy about it.

An insider tells the news organization that Bush flipped out, due to the nature of the messages.

"Reggie saw text messages on Kim's phone from Kanye West and flipped out on her," the source tells FOX411.

"The texts referenced a night they hung out, how much fun he had, how hot Kim was, and more racy things that got Reggie's imagination running."

The source said Bush confront Kim about the texts, and the couple had a huge fight, resulting in the break-up. Both reportedly realized there was trust issues, and agreed to end things.

"They realized there were trust issues on both sides, and couldn't go forward," the source told Fox411.

At press time, the rumors were unconfirmed. Both West and Kim's camps were not available for comment.