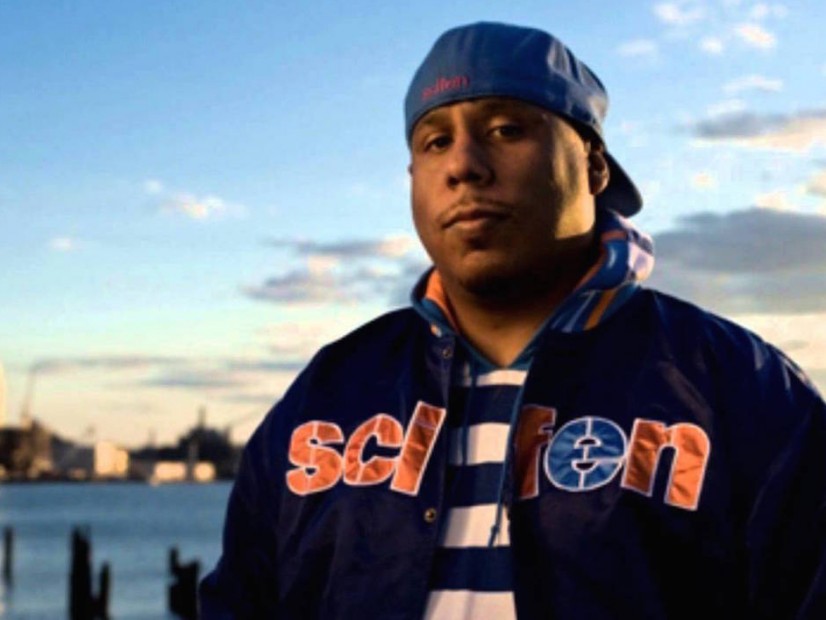 New York City honored Pumpkinhead by naming a street after him. The official ceremony for "Robert 'PH' Diaz Way" was held yesterday (April 24) as a block of De Graw Street in Brooklyn was changed as a permanent tribute.

Talib Kweli, Immortal Technique, other collaborators and friends and family of the late PH were in attendance.

"Long after we were freestyling and battling in the park, when the battle scene became more international and global, he jumped back in it at an age where a lot of people would’ve been scared," Kweli, who went to elementary school with Pumpkinhead, says to Billboard. "The way they do it now, it’s advanced, as it should be... Pumpkinhead wasn’t scared of this advancement. He never stopped competing and evolving with his craft. ... He had as much influence on his community as his community had on him, and you can see it literally by the fact that he has a street named after him.”

The street name was the idea of the battle rapper's friend, Claudia “CL Smoothie” Imperiale. She gathered signatures and comments from the community to present to the Park Slope community board and cited the community's evolution as a result of gentrification as one of the reasons to preserve local history.

"I didn’t want them to just think, some rapper from Park Slope, his friends think he should have a block named after him,” Imperiale says. “I thought it was important that they knew exactly who he was, what he stood for and what he represented."

Immortal Technique shared his memories of Pumpkinhead on Instagram and encouraged the community to attend the ceremony.

"If you're gonna be somewhere in Brooklyn today," he writes for the caption of a flier for the event. "This is the place to be. I pray for his family to be strong at this time. This is sad for me. This brother was one of the first established underground heads who really believed in me. I would make fun of him speaking terrible Spanish and he belittled my only coat at the time which was an old Army jacket I used to carry CDs in to sell on the street. When he agreed to be on Revolutionary Vol.1 I saw it as a great honor. Thank you my old friend. Rest in Power Robert. We all miss you Pumpkinhead. See these young brothers know you as PH. I'm gonna always call you Pumpkinhead though. Because I have legions, soldiers, lawyers, etc. but I don't have that many friends that came out of the dirt with me left. Hard to bury another. We used to have a Harlem vs. Brooklyn debate and now I'll carry that on with Poison Pen. #Pumpkinhead #PH #Brooklyn#ImmortalTechnique."

Late rapper Pumpkinhead has had a street named after him, according to PWRMoves.

New York Mayor Bill de Blasio made the announcement Thursday (February 25) that Degraw Street between Fourth and Fifth avenues in Brooklyn will be renamed “Robert PH Diaz Way” in honor of Pumpkinhead, whose given name was Robert Diaz.

Earlier this month, a section of Sedwick Avenue in the Bronx was named “Hip Hop Way” in honor of the location that served as Hip Hop’s birthplace.

"Recognizing the Bronx block that houses 1520 Sedgwick Avenue as 'Hip Hop Boulevard’ demonstrates reverence and hometown pride for the artistic and cultural phenomenon that DJ Kool Herc, Cindy Campbell, the building and surrounding neighborhood helped create,” Faces continued in his statement. "Similarly, the naming of DeGraw Street between Fourth and Fifth Avenues in Park Slope, Brooklyn to honor Robert ‘PH' Diaz, demonstrates a keen understanding that members of New York’s hip-hop artistic community can touch many lives in positive ways, and, as in Diaz’s case, are indeed worthy of tribute. We salute City Council members and the Mayor for honoring the wishes of Diaz’s family, friends and fans.”

Pumpkindhead passed away June 9, 2015. He was a revered battle rapper who released the acclaimed Orange Moon Over Brooklyn album in 2005.

"Just finding out I lost a great friend today,” Talib Kweli wrote at the time. "RIP Robert Diaz AKA Pumpkinhead. Robert and I went to PS 282 together in Brooklyn, 4th grade. We then reconnected when he became an MC during the indie era of the late 90s. He signed to Makin Records, I signed to Rawkus. Then PH went on to reinvent himself again in the new battle rap era. He LOVED MCing and was great at it. To lose such a great human being so early in his life, man. No words. There is a fraternity of artists who were around for all of this. PH inspired us all. He will live on thru us even though his physical presence will be missed. RIP Robert Diaz."